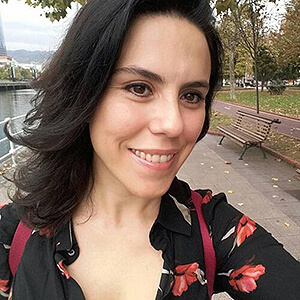 Ignacia Perugorría is a researcher at the Collective Identity Research Center, and a PhD candidate in sociology at the University of the Basque Country (Spain). Her dissertation studies the interaction between identity battles, social movement networks and political opportunity structures in the making of what she calls “participatory culture” and “ephimeral cities.”

Ignacia has taught undergraduate and graduate courses in Latin America, the United States and Spain, and has participated in numerous research projects with American, European and Argentine funding. She is currently a member of the Consolidated and High Performance Research Group “Social change, emerging forms of subjectivity and identity in contemporary society” [IT1199-19]” of the Basque University System, and of the research project “Sharing Society. The Impact of Collaborative Collective Actions in the Transformation of Contemporary Societies“

Her most recent publications include From Indignation to Occupation: A New Wave of Global Mobilization (Current Sociology special issue, edited with T. Benski, L. Langman and B. Tejerina, 2013), and the volumes Crisis and Social Mobilization in Contemporary Spain: The 15M Movement (2017, Routledge, The Mobilization Series on Social Movements, Protest and Culture); Global Movements, National Grievances. Mobilizing for ´Real Democracy´and Social Justice (2012); and From Social to Political. New forms of Mobilization and Democratization (2012), all of them co-edited with B. Tejerina.

Her research interests lie at the intersection of culture, politics and the city, with a particular focus on cultural commons, and cultural activism and citizenship.