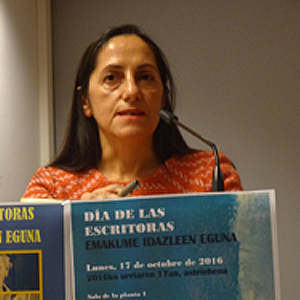 Professor of Hispano-American Literature at the University of Basque Country. Ph.D. in Hispanic Literature from the University of California, San Diego. She has been Full Professor at the California State University. She has taught literary criticism on the Interdisciplinary Programme of Women’s Studies at El Colegio de México and at the University of Miami. She has received numerous research grants from American universities, as well as the Spanish Ministry of Culture. Her publications focus on the relationship between literature and contemporary Hispanic hegemonic politics. She is IP of the Gender-Exile research project. She coordinates the Postcolonial Transatlantic Studies project in the Anthropos publishing house. Her publications include Las intelectuales, de la II República al exilio, National Research Prize 2002, five monographs and several international articles on gender studies and literature. Her studies on Mexican and Chicano narrative and on experimental cinema deserve special attention: She has lectured and published on the US-Mexico border, film and literature studies such as: “Border crossing with dead man in the background” (Mexican Films on the US Border), “Chicano Counter Cinema: Contesting Hollywood continuity “and” Performing The Border: Juárez “. The last article “Mexico in the neocolonial order: aesthetics of violence and policies of disappearance “, in JLAR, 2019. Among her works of fiction, it is worth mentioning Ciudad final, (Montesinos, 2007) on the femicides of Ciudad Juárez.